First of all I will introduce myself a little and tell you my place in this build. I ran into Asphiax when I came looking for the EURISKO. Then we started talking about our passion for SCI-FI and came up with the idea for this build. The first weeks we only did a lot of brainstorming to come up with a good and unique concept. As you saw in the start post above, Asphiax made some awesome 3D renders and started building the case. Yesterday I saw it for the first time and it really shows some craftsmanship and quality! This case will be about the fun of building and learning new skills.

We want to give our special thanks to Simon Atkinson, who let us use some of his artwork for the engravings, he does some amazing artwork, model making and drawing! Be sure to check out his website

Today we will show you our plans for the engravings so here we go!

This is a 3D render of the case including the outside casing.

The front will show a picture of the apes touching the monolith, and the astronaut inside a tunnel.

On the top we will have an engraving of the Discovery 1.

And in the back it will feature the rising moon and the astronaut inside the centrifuge in Discovery 1.

Now for the two largest panels.

The one on the back of the motherboard plate will be fully covered and show a picture of earth, the star-child looking down to earth and station V shooting out the Orion spacecraft

And the last but most certainly not least side will have a plexiglass window in the shapes of some tears in the metal. This has to do with our own chimera, in which the ape finally manages to damage the monolith. Hence the theme “The rise and fall of men”.  It will also feature an engraving of the EVA .

And an overall layout of all the engravings to give you a better understanding. 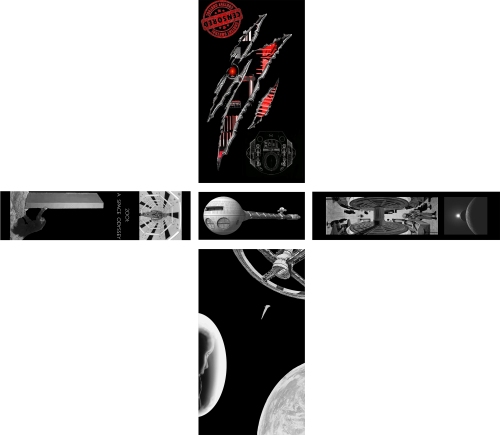 And the final feature will stay a mystery for now,  but we will keep you posted!

A word of thanks to my SPONSORS

If you would like more info on a project you want built please email me at : Info@Modwithme.com

Find all the posts about project :